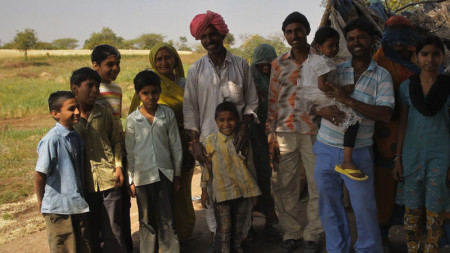 Bhadrirath has a smallholding a few hundred yards from Nanu Ram’s. When he saw how Nanu Ram’s fields had been transformed, he immediately applied to ASA to join the programme too.

He had been granted a very difficult piece of land by the local government 25 years ago which he had been trying to make into something workable ever since. It had been a terrible struggle, trying to level his land and grow a monsoon crop before having to turn to migration labour for the majority of the year.

However, he is a very enterprising man, and having got his well, he has made a real success of his fields. He even looked into creating his own types of fruit, and if we have a poster boy for what is possible when irrigation is provided, he would be it.﻿﻿