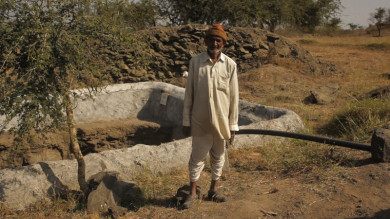 When we first saw him in the spring of 2009, his well was just being finished and he was full of hope. When we went back to see him a year later, everything had happened as he had wanted, and he was growing wheat and vegetables both for his own family’s consumption and for sale.﻿﻿

Nanu Ram was one of the first farmers to join the Where There’s a Well programme. Although an older farmer, he could see clearly the potential benefits a well would bring him and his children, and was an enthusiastic partner in the project.